Mobile in 2017: The Year of Immersion, Context, and Conversation 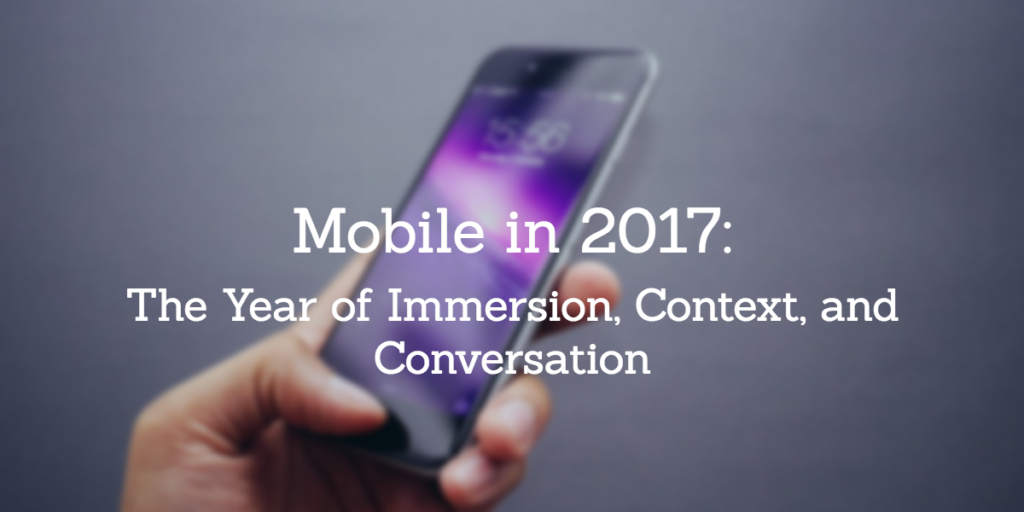 Key mobile trends to monitor include an increase in hybrid apps for the enterprise, more artificial intelligence, and an explosion of VR and AR apps. 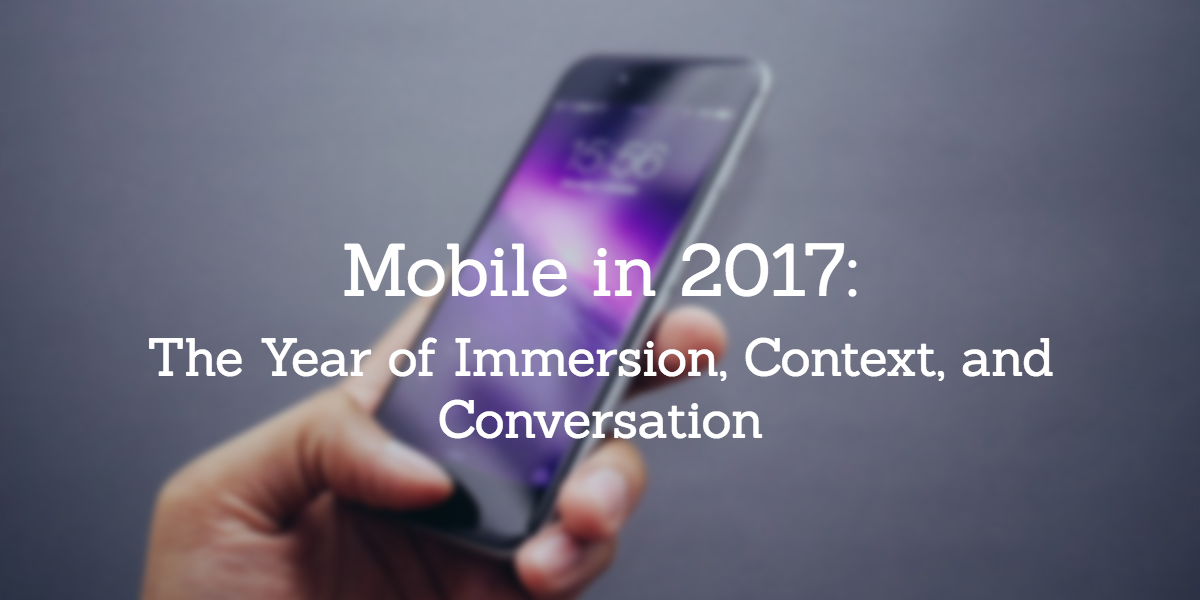 2016 proved to be an interesting year for mobile.

On one hand, smartphone users are downloading fewer and fewer apps.

On the other hand, revenue from apps is increasing and app technology continues to advance.

Many changes occurred in 2016, and we’ll continue to see shifts in behavior for mobile app developers, enterprises, and consumers next year.

So we’ve compiled 10 important mobile trends to monitor in 2017, which is sure to be another exciting year.

Mobile apps by the numbers

Before jumping into the upcoming trends, let’s take a look at the most recent industry statistics to put everything in perspective.

According to the latest eMarketer stats, there will be an estimated 4.30 billion mobile phone users globally, representing nearly 60% of the global population in 2016. eMarketer expects this number to grow 3.2% in 2017, bringing the total to 4.34 billion.

The number of mobile apps in the major app stores continue to increase as well.

As of June 2016, the Apple Store had 2 million apps available, while Google Play offered 2.2 million. Additionally, Statista predicts there will have been 224 billion app downloads in 2016.

Revenue from mobile apps is growing at a very healthy clip. Whether there is a cost per download (becoming increasingly rare), a fee to upgrade from a free version (“freemium”), or a charge to eliminate ads, global mobile app revenue is set to soar in the coming years.

By the end of this year, an estimated $51 billion in total revenue is projected, increasing to over $100 billion by 2020.

While many have claimed that mobile apps are dead, the numbers prove otherwise. Rather, the mobile app ecosystem is simply evolving and will continue to do so in 2017.

Mobile apps will continue to adapt as end users demand more functionality and unique experiences at their fingertips.

2016 and years prior scratched the surface, setting the stage for some of the trends we’ll see in 2017. These trends will have simultaneous impact on users, enterprises, and developers.

Here’s what we can look forward to in the coming year.

Today, most of us are used to completing work tasks on our own devices, be it tablets or smartphones. But this wasn’t the case a few years ago because many companies were reluctant to adopt Bring Your Own Device (BYOD) policies.

Per a recent study by Crowd Research Partners, 72% of responding organizations make some level of BYOD available to employees. 9% of businesses have no policies in place, but plan to implement them next year. Furthermore, Crowd Research Partners predicts that over half the globe’s employers will require BYOD by 2017.

This increase in BYOD and the relatively equal market share of iPhone and Android phones in the U.S. means there will be a greater need for the development of hybrid enterprise apps that are capable of being run on any device and operating system.

A hybrid app consists of a mobile website wrapped in an iOS or Android app wrapper. Thus, the content and functionality is primarily housed in and managed via the mobile website, but the features are accessible through an app that is downloaded from Google Play or the Apple App Store.

The advantage of hybrid apps is that companies can build the mobile website and deploy on multiple platforms easily, quickly, and inexpensively. Also, developers will spend less time managing the multiple apps in the future, since they’ll primarily need to maintain the mobile website only.

By building technology that can be used across iOS and Android, organizations can cut down on cost and development time while providing helpful applications to their employees. And with the increase in BYOD, hybrid apps will become more important and prevalent.

2) Citizen developers will be welcomed with open arms

Thanks to increased BYOD adoption and the need to produce enterprise hybrid app solutions at accelerated rates, we’ll see an increase in citizen developers – developers with no computer science degree or formal training who use “low code,” drag-and-drop development tools to create simple enterprise app solutions.

As companies continue to build apps to help on-the-go employees be more efficient, traditional developers will likely become backlogged. Because of this, citizen developers will be needed to fill in the gaps and build simpler apps with low-code platforms such as Mendix, Quickbase, Outsystems, and others.

The end user will remain the center of attention, as their experience determines the success of an app.

Companies will look to take design to the next level in 2017 by partnering with animators, graphic artists, and data scientists to take advantage of micro-moments, more animation and videos, data-driven design, and changes in user mapping.

These micro-moments are the perfect time for mobile designers to insert calls-to-action into a user’s journey by adding elements such as a payment prompt when a user is browsing their favorite retail site, or near-field communications (NFC) alerts while a user is walking the aisles of a brick-and-mortar store.

Advances in HTML5, CSS5 and JavaScript libraries will give interaction designers more freedom to add touches of animation to help direct user behavior and increase the level of engagement in apps.

In addition, the use of video on mobile will increase. Cisco states that video consumption will account for 79% of global internet traffic by 2020, with much of this being consumed on mobile devices.

In 2017, developers and design teams will increasingly partner with data scientists to analyze user data, make sense of it, and use it to create deeper, richer experiences. This can lead to growth in app loyalty, increased engagement through more relevant, customized content and recommendations, and potentially a higher number of in-app purchases.

During the typical design process, UX designers map the journey of user flows, which offers the essential understanding of the touch points and loopholes in the user interaction cycle; essentially, it maps what happens for the ideal user on a set path.

Next year, UX designers will add failure mapping, which addresses the experience of non-ideal paths through an app, to their design processes. Practicing failure mapping will allow UX designers to better understand, anticipate, and model non-ideal user scenarios in order to learn where users may stumble.

4) Interest in building for Android first will increase

As mentioned above, Google Play surpassed Apple’s App Store in number of apps available.  In 2017, developers’ preference for the Android platform will continue to increase for the following reasons:

The trend of Android-first will gain momentum in 2017, especially for those apps targeting international communities.

Several security breaches took place in 2016, and this is likely to continue as hackers become more sophisticated in their craft.

Next year, both Google and Apple will be hyper-focused on securing their ecosystems by employing features beyond two-step user authentication.

Virtual and augmented reality are two hot topics that will only get hotter in 2017.

Pokemon Go brought AR to the mainstream, and VR is now being used for much more than gaming.

These technologies are becoming prevalent in several industries, including real estate and retail. And with the increased venture capital being deployed to AR and VR, that trend will only increase.

For instance, Sotheby’s International Realty is creating immersive experiences for their clients by using VR to sell multi-million dollar homes in LA and New York City. The use of VR allows realtors to show homes from across the country or world and immediately address any concerns or problems, just as they would during a physical tour.

American Apparel has incorporated AR functionality into their mobile app that helps in-store customers find product information and customer reviews. It also gives customers the ability to purchase the product online if it’s out of stock in the store.

2017 will be big for VR and AR, so look out for many more immersive experiences to come.

A rise in mobile apps that combine internet connectivity, data processing, and machine learning will be at our fingertips in 2017.

As our connected devices become increasingly capable of capturing more of our personal data, such as movement data and location information, these “thinking” apps will have the ability to deliver more actionable, personalized experiences.

Leaders in this space include:

Expect to see many more apps in different industries incorporating context into their feature sets in 2017.

Although messengers and chatbots became popular during the latter part of 2016, they will hit their stride in 2017.

Consumers want on-demand responses and interaction with the brands they love; chatbots and messengers are the answer. Businesses will leverage these technologies to engage with their customers 24/7 and build their brand loyalty and visibility.

Next year, there will be an estimated 1.81 billion mobile phone messenger app users worldwide, up from 1.61 billion by the end of 2016. So the opportunity for the use of chatbots is massive.

More and more businesses are taking advantage of messengers and bots.

Earlier this year, Sephora launched their chatbot on Kik, a popular messaging app. Kik users are prompted by the chatbot and asked to provide more information about themselves through a quiz. The bot then offers personalized beauty tips, product recommendations, and reviews. Additionally, users can purchase products mentioned in the chat without leaving the Kik app.

The Facebook Messenger-Uber chatbot is another excellent example of bot implementation. Messenger allows users to hail a ride simply by starting a conversation with the Uber chatbot, without having to open the Uber app at all.

In 2017, companies will get very creative on how and where to implement bots, and customers will benefit.

Though security will remain a concern, mobile commerce transactions will continue to grow.

Improvements in user experience, conversational chatbots, and increased local commerce will drive these increases in mobile commerce in 2017 and beyond.

While it’s hard to believe, many small businesses still have not jumped on the mobile app bandwagon. This will change in 2017.

High costs and fear of commitment have been two hurdles, but a decrease in app development costs has allowed small businesses to re-think their digital strategy.

More and more small businesses realize this, and thus we’ll see many more of them launch an app next year.

The behaviors of business and consumers continue to evolve, and the mobile app industry is changing in lockstep.

New technologies such as virtual and augmented reality, AI chatbots, and contextual understanding will continue to develop to add value to everyday life.

Businesses will adapt their app development and deployment strategies to better engage their customers and grow their revenue.

2017 looks to be a very exciting year for mobile indeed.