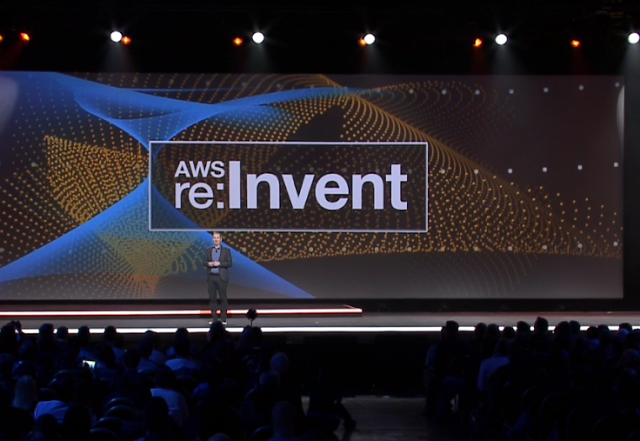 It’s clear that the leading cloud computing vendor wants to add to its dominating market share position and won’t stop innovating just because they’re in the lead.

Over 30,000 attendees converged on Vegas to take in everything that AWS has to offer, and here are the four key trends that Amazon focused on with their product launches.

The Amazon Echo has been one of the most critically acclaimed hardware products in recent memory, and much of that has to do with the quality of Alexa, the voice-powered, artificially-intelligent virtual assistant.

Now that powerful AI technology is available to you with Amazon Lex.

Lex allows you to leverage the AI capabilities of Alexa to build conversational applications like chatbots and create deep-learning and natural-language processing apps without having to collect large amounts of data.

AI is the future, and AWS wants to be the foundation upon what the future is built.

First, they announced updates to its Snowball solution, which allows for the transfer of huge amounts of data to the AWS cloud. Also, they literally rolled out Snowmobile, a massive 45-foot long shipping container that can move up to 100 petabytes of data from your data center to AWS S3 or Glacier.

They also launched Amazon Athena, a tool that facilitates running queries on data that is stored in AWS S3. Developers can use SQL to run queries and don’t have to worry about setting up the infrastructure to do so, since Athena is serverless.

The company also previewed AWS Glue, a service that allows for much smoother data integration and extract, transform, and load (ETL) processes. Glue will make it much easier to aggregate data from multiple sources, clean it up, and get it ready for analysis in business intelligence and other tools.

Data is the core to any business, and AWS is building tools to help wrangle and analyze it better and faster.

The company previewed AWS X-Ray, which helps developers more easily debug distributed applications. X-Ray shows how each of your app’s components are performing so you can troubleshoot bottlenecks and issues.

They also launched AWS OpsWorks for Chef Automate in partnership with configuration management vendor Chef. Now you can automate how servers are configured, deployed, and managed for continuous deployment and automated testing.

Also, AWS announced the Personal Health Dashboard that provides an in-depth look into the performance and availability of the specific AWS components that you’re using. Alerts are triggered when an impactful change occurs, giving you unprecedented visibility into the health of your cloud environment.

AWS is also stepping up its security chops with the launch of AWS Shield. Shield Standard, which is free, helps protect you from 96% of distributed denial of service (DDoS) attacks, while Shield Advanced provides increased protection for apps running on Elastic Load Balancing, Cloudfront, and Route 53 services.

We mentioned that serverless architectures are going to see big growth in 2017, and AWS confirmed this with a number of serverless launches and improvements at re:Invent.

Lambda@Edge lets you run code at CloudFront edge locations without provisioning or managing servers, which will allows apps to respond faster globally since the infrastructure will be closer to your users.

AWS Greengrass facilitates the running of Lambdas by internet of things (IoT) devices to help hardware keep data in sync and communicate with other devices securely.

Serverless is getting big, and AWS is building the tools to accelerate this growth.

Amazon launched nearly 30 new products and services at re:Invent last week, and while we didn’t go in-depth into all of them, one thing is clear – AWS continues to innovate to stay ahead of its competitors.

Whether you’re building a chatbot, working with huge amounts of data, managing DevOps, or going serverless, AWS is working hard to make your job easier and help you build the best applications, faster.

What are your thoughts about the new product announcements made at re:Invent? We’d love to hear your remarks in the comments.

PrevPreviousCloud Computing in 2017: The 10 Most Important Trends to Monitor
NextCloud migration: 5 strategies for migrating your applications to the cloudNext