Infrastructure as Code: 5 Reasons Why You Should Implement IaC Now 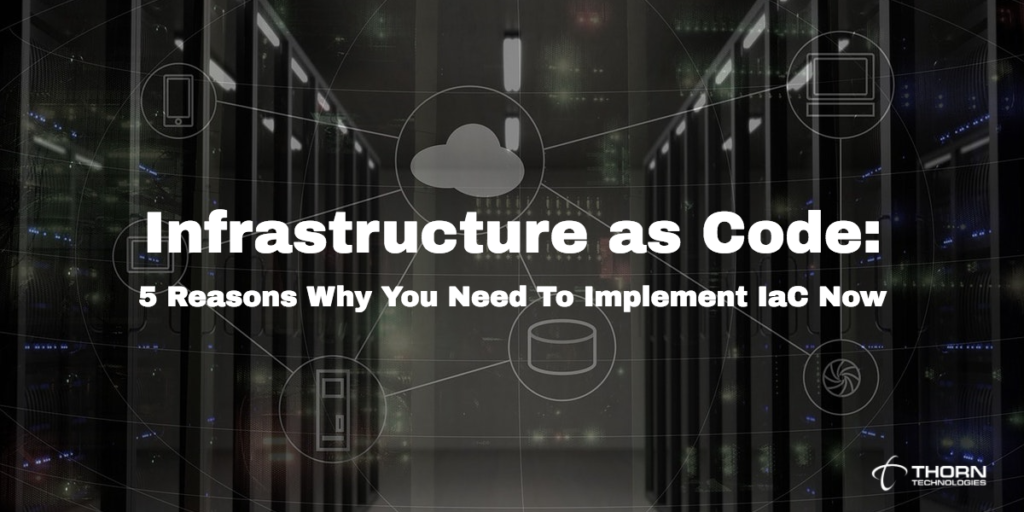 This is the first of a series of articles about Infrastructure as Code. Check out other posts here:

There’s no doubt that cloud computing has had a major impact on how companies build, scale, and maintain technology products. The ability to click a few buttons to provision servers, databases, and other infrastructure has led to an increase in developer productivity we’ve never seen before.

While it’s easy to spin up simple cloud architectures, mistakes can easily be made provisioning complex ones. Human error will always be present, especially when you can launch cloud infrastructure by clicking buttons on a web app.

The only way to avoid these kinds of errors is through automation, and Infrastructure as Code is helping engineers automatically launch cloud environments quickly and without mistakes.

How IT infrastructure has historically been provisioned

In the past, setting up IT infrastructure has been a very manual process.

Humans have to physically rack and stack servers. Then this hardware has to be manually configured to the requirements and settings of the operating system used and application that’s being hosted. Finally, the application has to be deployed to the hardware.

Only then can your application be launched. Ugh.

There are many drawbacks to this manual process.

First, it can take a long time to acquire the necessary hardware. You’re at the mercy of the hardware manufacturer’s production and delivery schedules. And if you need products customized for specific requirements, it could take months to receive your order.

Next, people have to be hired to perform the tedious setup work. You’ll need network engineers to set up physical network infrastructure, storage engineers to maintain physical drives, and many others to maintain all of this hardware. That leads to more overhead, management, and costs.

Real estate has to be acquired to build data centers to house all of this hardware. On top of that, you’ll have to maintain these data centers, which means paying maintenance and security employees, HVAC and electricity expenses, and many other costs.

Achieving high availability of your applications is big problem as well. You would have to build a backup data center, which could double your real estate and other costs mentioned above.

It would also take a long time to scale an application to accommodate high traffic. Because racking, stacking, and configuring servers is such a slow process, many applications would buckle under spikes in usage while this hardware was being set up. This would have a huge impact in your company’s ability to serve your customers and launch new products and services quickly.

To account for these traffic spikes, you may have to provision more servers than you actually need on a daily basis. Thus, you’ll have servers that sit idle for large amounts of time, which will increase your costs for this unused capacity.

Finally, because different people are manually deploying these servers, setups are bound to be inconsistent. This can lead to unwanted variance in configurations, which can be detrimental to how your applications run.

The advent of cloud computing addresses some of these problems.

You no longer have to rack and stack servers, which alleviates all of the issues and costs that come with human capital and real estate.

Also, you could spin up servers, databases, and other necessary infrastructure very quickly, which would address the scalability, high availability, and agility problems.

But the configuration consistency issue, where manual setup of cloud infrastructure can lead to discrepancies, still remains.

That’s where Infrastructure as Code comes into play.

Definition of Infrastructure as Code

Infrastructure as Code (IaC) is a method to provision and manage IT infrastructure through the use of source code, rather than through standard operating procedures and manual processes.

You’re basically treating your servers, databases, networks, and other infrastructure like software. And this code can help you configure and deploy these infrastructure components quickly and consistently.

IaC helps you automate the infrastructure deployment process in a repeatable, consistent manner, which has many benefits. 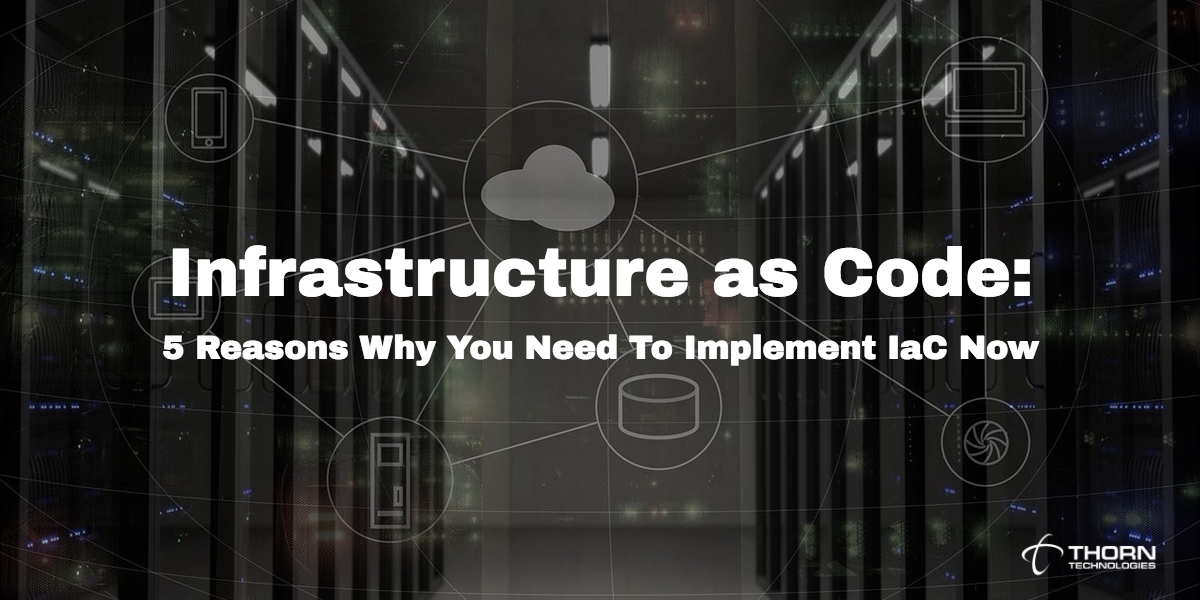 Benefits of Infrastructure as Code

IaC allows you to spin up an entire infrastructure architecture by running a script.

Not only can you deploy virtual servers, but you can also launch pre-configured databases, network infrastructure, storage systems, load balancers, and any other cloud service that you may need.

You can do this quickly and easily for development, staging, and production environments, which can make your software development process much more efficient (more about this later).

Also, you can easily deploy standard infrastructure environments in other regions where your cloud provider operates so they can be used for backup and disaster recovery.

You can do all this by writing and running code.

Standard operating procedures can help maintain some consistency in the infrastructure deployment process. But human error will always rear its ugly head, which may leave you with subtle differences in configurations that may be difficult to debug.

IaC completely standardizes the setup of infrastructure so there is reduced possibility of any errors or deviations. This will decrease the chances of any incompatibility issues with your infrastructure and help your applications run more smoothly.

Imagine having a lead engineer be the only one who knows the ins and outs of your infrastructure setup. Now imagine that engineer leaving your company.

What would you do then? There’d be a bunch of questions, some fear and panic, and many attempts at reverse engineering.

Not only does IaC automate the process, but it also serves as a form of documentation of the proper way to instantiate infrastructure and insurance in the case where employees leave your company with institutional knowledge.

Configurations are bound to change to accommodate new features, additional integrations, and other edits to the application’s source code. If an engineer edits the deployment protocol, it can be difficult to pin down exactly what adjustments were made and who was responsible.

Because code can be version-controlled, IaC allows every change to your server configuration to be documented, logged, and tracked. And these configurations can be tested, just like code.

So if there is an issue with the new setup configuration, it can be pinpointed and corrected much more easily, minimizing risk of issues or failure.

Developer productivity drastically increases with the use of IaC. Cloud architectures can be easily deployed in multiple stages to make the software development life cycle much more efficient.

Developers can launch their own sandbox environments to develop in. QA can have a copy of production that they can thoroughly test. Security and user acceptance testing can occur in separate staging environments. And then the application code and infrastructure can be deployed to production in one move.

Infrastructure as Code allows your company to use Continuous Integration and Continuous Deployment techniques while minimizing the introduction of human errors after the development stage.

You can also include in your IaC script the spinning down of environments when they’re not in use. This will shut down all the resources that your script created, so you won’t end up with a bunch of orphan cloud components that everyone is too afraid to delete. This will further increase the productivity of your engineering staff by having a clean and organized cloud account.

Automating the infrastructure deployment process allows engineers to spend less time performing manual work, and more time executing higher-value tasks. Because of this increased productivity, your company can save money on hiring costs and engineers’ salaries.

As mentioned earlier, your IaC script can automatically spin down environments when they’re not in use, which will further save on cloud computing costs.

Infrastructure as Code can simplify and accelerate your infrastructure provisioning process, help you avoid mistakes and comply with policies, keep your environments consistent, and save your company a lot of time and money.

Your engineers can be more productive on focus on higher-value tasks. And you can better serve your customers.

Check out other posts in our IaC series:

Or you can download all of these articles together in one handy eBook by clicking the link below. Thanks for reading!

PrevPreviousWP SureStack – WordPress optimized for AWS – Available Now!
NextInfrastructure as Code: 6 best practices to get the most out of IaCNext