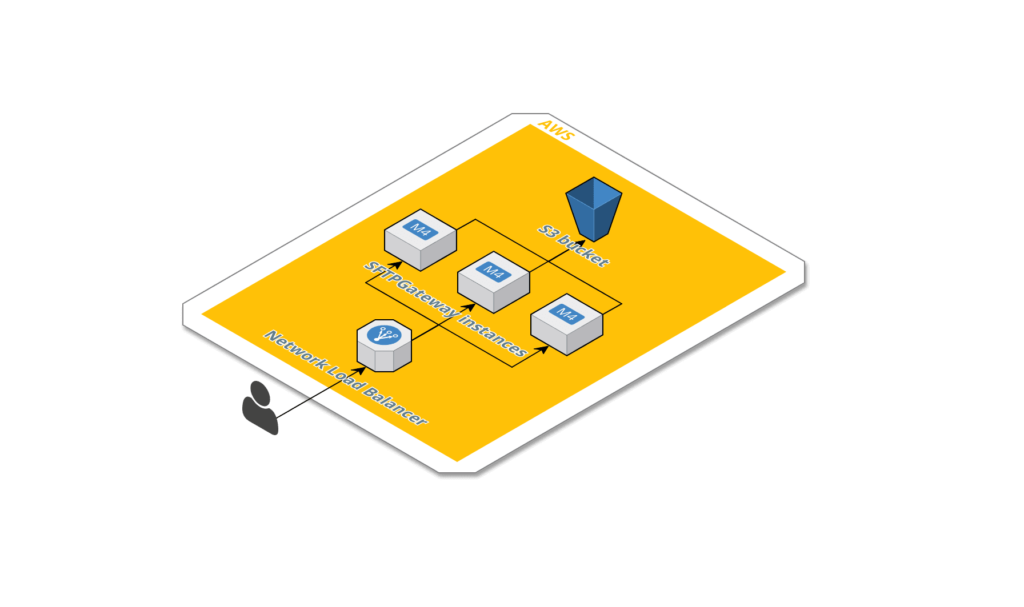 A few months ago we launched SFTP Gateway, a pre-configured SFTP server that lets you easily and securely transfer files to Amazon S3. Since the launch, many users have requested that SFTP Gateway be highly available.

Currently, as a single instance, SFTP Gateway would be unavailable in the event of a failure of an AWS Availability Zone. You could create multiple instances of SFTP Gateway in separate Availability Zones, but you would need to know multiple IP addresses and test the connection to each instance. This can be extremely complicated and cumbersome to the end user.

With the announcement of a new flavor of Elastic Load Balancer named Network Load Balancer, setting up a high availability version of SFTP Gateway is now much more convenient.

Network Load Balancer provides high throughput, low latency, and support for long-lived connections over TCP, and we can take advantage of these features by connecting SFTP Gateway to multiple EC2 instances in different availability zones to create a high availability infrastructure.

The Network Load Balancer will route logins to the different servers and provide SFTP access even if an EC2 instance or entire Availability Zone goes offline.

The Network Load Balancer is easy to set up with SFTP Gateway on existing or new infrastructures.

First, you should know about some caveats before you start the setup.

Before you get started, you should be aware of some caveats. By setting up NLB with SFTP Gateway, you’ll have to do some things a little differently.

User creation is a bit different

Creating a user won’t be as straightforward as it normally is.

Currently, to create a user, all you would have to do is type `sudo addsftpuser <username>` into the command line.

With the highly available setup, you have the following options to create a user:

While SFTP Gateway allows you to store files on the SFTP server, it only moves files that are in the /uploads directory to S3. With the high availability setup, the files that exist on one particular instance will not be copied to the other instances, which would be concerning if you would like to have that non-S3 functionality.

To deal with this, you’ll have to take the following actions:

Network Load Balancer is not a free service, so this will add some cost to your setup.

There is an hourly charge (about $0.02 per hour depending on region) and an additional cost based on how much the Load Balancer is used.

If these caveats are manageable, let’s move on to setting up NLB and SFTP Gateway for high availability.

You can skip this step if you have an existing SFTP Gateway setup.

Next, create your users by connecting to the Gateway via SSH from the ec2-user account, and running `sudo addsftpuser <username>` . Do this for however many users you need. It won’t be as straightforward to create new users once the Network Load Balancer is setup with multiple SFTP Gateways, which is the important caveat to take into account.

Once you have setup your SFTP Gateway with users, test it out to make sure files make it to the correct destinations on S3.

After your SFTP Gateway is configured and users are added, it is time to clone the SFTP Gateway by creating an image of the EC2 instance. Use the following steps as a guide:

1) Navigate to the EC2 Service on AWS.

3) Mark the checkbox next to the SFTP Gateway instance.

5) Configure the image with a name like “SFTP Gateway Configured” and click Create Image (refer to Figure 2 and 3 below).

6) Navigate to the Images>AMIs link on the left navigation. You should see your new image with a pending status. Proceed to the next step when it has a status of available.

7) Mark the checkbox next to the new image, and click the Launch button at the top of the list.

8) Configure the new instance with your preferences and set it to run in a different availability zone than the previous instance.

9) Repeat steps 6 through 8 as many times as you’d like to create a more highly available infrastructure.

The last step is to create the Network Load Balancer and configure it to use the SFTP Gateway instances created in Step 2. Use the following steps as a guide:

1) Navigate to the EC2 Service on AWS.

2) Click the Load Balancing>Load Balancers link on the left navigation.

5) Set a name for the Load Balancer, leave the Scheme as internet-facing (refer to figure 4).

6) Set the Listener Load Balancer Port to 22, which is the port SFTP uses (refer to figure 4).

10) Set the Port to 22, leave the protocol as TCP and the target type as instance (refer to figure 5).

12) Select the Instances that will be load balanced in the bottom Instances list (refer to figure 6).

13) Click Add to registered and the instances will appear in the top Registered targets list (refer to figure 7).

15) If there are no errors, click Create. The list of load balancers will now show with the new load balancer showing a state of provisioning. It could take up to 10 minutes for the state to switch to active. Proceed to the next step when the state is active.

Use the DNS name in your SFTP client to test out the highly available SFTP Gateway!

High availability has been a frequently requested feature, and the launch of Network Load Balancer has made the setup of a highly-available SFTP Gateway more convenient.

We hope that this tutorial was helpful in guiding you to set up a highly available SFTP Gateway. If you have any issues, please write a comment on this post and we’ll get back to you soon.

PrevPreviousWhy you should embrace, not fear, cloud vendor lock-in
NextHow edge computing and the cloud will power the future of IoTNext